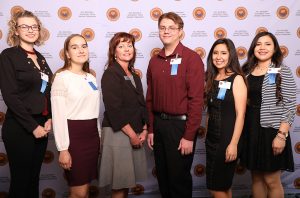 All-Arizona students demonstrate academic excellence and intellectual rigor combined with leadership and service that extends beyond the classroom to benefit society. Phi Theta Kappa, the American Association of Community Colleges, Arizona Community Colleges, the Arizona Board of Regents and the Follett Higher Education Group help these students reach their educational goals by awarding scholarships and issuing tuition waivers to any of Arizona’s three state universities: Arizona State University, Northern Arizona University or the University of Arizona.

The awards were announced at the All-Arizona Academic Team Recognition Ceremony held at the Hilton Phoenix/Mesa on Thursday, March 1, 2018.

Langan plans to earn a bachelor’s degree in accounting from Arizona State University and become a managerial accountant. She is a member of Phi Theta Kappa and the Honors Program. She has assisted with various college and community events such as the San Tan Valley Campus Fall Festival, Welcome Week activities, and the AJHS NJROTC Car Show.

As a student, Pangburn has been involved at CAC as a tutor, a contributor to the CAC Cactus Newspaper, and as Student Government Campus Activities Director. She plans to earn a bachelor’s degree in global/international studies with a minor in political science from Arizona State University. She will use her education to pursue a career in the United States government as a political Foreign Service officer in order to support the United States with diplomacy abroad. She is also considering furthering her education to the doctorate level in order to become a professor and continue to explore the world of academia.

During his time at CAC, Fode has been involved with student government and Phi Theta Kappa. Additionally, he volunteers with the First Conservative Baptist Church of Mammoth and Mammoth Christian Youth Center Thrift Store. He was named outstanding Biological Sciences student, Outstanding Social Sciences student and is a Who’s Who Among Students recipient. Fode plans to earn his bachelor’s degree in physiology from the University of Arizona and become a doctor of chiropractic medicine.

Cadena plans to transfer to the University of Arizona to earn a bachelor’s degree in nursing. Her goal is to become a labor and delivery nurse. She believes helping to bring new life into this world would be extraordinary.  Cadena is a Phi Theta Kappa member and is on the college dean’s list. She is also active in young adult ministry outreach events in her community.