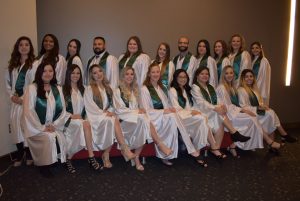 Once the graduates received their pins, class speaker Alesha Row provided a touching speech, speaking affectionately about each professor’s lessons. She stated, “As the 59th class, … We now know how to be better humans & hold ourselves accountable (in the nursing profession).”