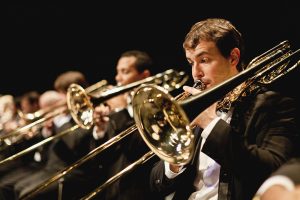 The concert will begin with the 37 member Poston Butte High School Concert Band under the leadership of Mr. John Woode. The band has been one of the main parts of the school’s culture and atmosphere from playing at pep assemblies, football games, basketball games, marching band competitions, parades, and many out of state performance opportunities. The band recently has performed for the holiday parades in Florence and Johnson Ranch, as well as a spring fling parade for the Caliente de Sol park. The band also had the opportunity to play for the pregame performance at the Phoenix suns vs. Detroit Pistons game on March 20.They will perform Ralph Vaughn Williams “English Folk Song Suite,” Jack Stamps beautiful rendition of “Be Thou My Vision,” and will conclude with “Jupiter” from Gustav Holst’s “Planets.”

The 60 member Central Arizona Community Wind Ensemble will present standard concert band music that has become favorites of their director, Rick Moore. This will include “Chorale and Shaker Dance” which an adaptation of “Simple Gifts.” The low brass and woodwind section will be featured with the spirited march “Them Basses.” The staple composition of the program will be “Of Sailors and Whales” by Francis McBeth. This five-movement suite depicts five scenes from Melville’s Moby Dick. In addition, they will perform Richard Wagner’s “Elsa’s Procession to the Cathedral” from his opera “Lohengrin” and Richard Rogers “Selections from “South Pacific.” The membership of the band consists of Central Arizona College students, high school students, area community members and music educators.