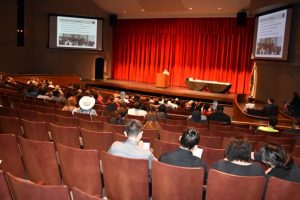 The Central Arizona College (CAC) chapter of the National Society of Leadership & Success (NSLS) recently held its spring induction and awards ceremony, marking the end of the Society’s inaugural year at CAC.

CAC’s Chapter of the NSLS was established in August 2018. In its first year on campus, 302 students joined. Ninety-one students completed the program in the fall and another fifty-nine were added as inducted members this spring. New inductees received a Certificate of Leadership Training honoring their achievement and lifetime membership in the NSLS during the April 23 ceremony.

The NSLS is the nation’s largest leadership society with 950,000 members representing 700 universities and colleges nationwide. In addition to honoring excellence, the NSLS provides a systematic program for members to build their leadership skills through participation on their campus.

To become an inducted member, students must follow a step-by-step program designed to build leadership skills through participation on campus. The first step is an orientation followed by a leadership training day where the students identify goals and their true passions to create actions steps for achieving their goals. The third and fourth steps include participation in three speaker broadcasts and three success networking team meetings. Following each meeting, they submit a reflective journal entry online. The final step is induction.