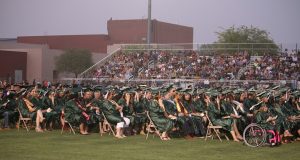 Central Arizona College recognized the accomplishments of its graduates during a district commencement ceremony on Friday, May 11 at Casa Grande Union High School.

Two student speakers, Berenice Pelayo and Cameryn Fossell, were nominated and selected by the college community to address their peers.

Berenice Pelayo graduated from Combs High School and attended classes at the Superstition Mountain Campus. While at CAC she was an Honor’s student, active in Phi Theta Kappa as an officer, active in Student Government Association, and worked on campus in the Honor’s Center. She also studied abroad in China for a semester and was a founding member of the Dreamer’s Club. Berenice was a recipient of the All-Arizona Scholarship and will attend ASU’s Barrett Honors College in the fall to major in Global Politics.

Pelayo encouraged fellow graduates to become involved and explained that everyone has the power to make change. She stated, “We have barely begun to tap into a lifetime of learning and re-learning. Although we may have all arrived at this stage in our life through very different paths. We had one common goal. To improve our lives through higher education. And now here we are closing one chapter of many to follow.”

Cameryn Fossell from the Superstition Mountain Campus received multiple nominations to be one of this year’s student speakers. A graduate of Apache Junction High School, she was active as an officer in Phi Theta Kappa and Student Government Association, was in the Honor’s program, worked on campus in the registration area for Student Services, and was awarded Student Employee of the Year. She runs a weight loss program in the community of Apache Junction. Cameryn received both an Associate of Arts and an Associate of Science this year, despite overcoming numerous health challenges during her time at CAC.

Fossell told her peers, “Life may not always go as planned but I believe your future is what you make it. The odds may not always be in your favor, but anything is possible if you just believe. Today we are all one step closer to making our dream a reality.” She added, if there is one thing life has taught me, and my mother reinforced, it is to live with purpose, do what you love, and above all dream big!”

Faculty senate president Clark Vangilder presented the candidates to the CAC Governing Board, which conferred the degrees and certificates. President Dr. Jackie Elliott along with the Governing Board members congratulated graduates as they crossed the stage.