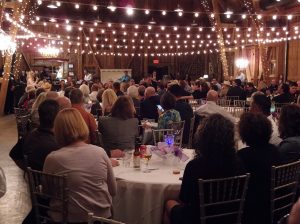 On Friday, February 9, the Central Arizona College Foundation hosted A Night of Stars to celebrate CAC alumni and friends who have generously offered time, talent and treasures to the Foundation and College.

More than 230 people attended the event, raising $25,000 to support scholarships and programs which provide a high quality and affordable education for students.

A Night of Stars included a silent auction, dinner, wine pull, music and dancing. Rick Moore, Director of Music and Band provided a music interlude for guests as they arrived.

Jackie Guthrie, CAC Foundation President, welcomed guests and Jack Stonebraker, CAC Foundation Member-at-Large Director celebrated the “stars” in attendance. Sean Ray with Sundt Construction Inc. offered comments about the CAC and Sundt partnership and the benefit to both entities and Mike Lillo, representing DPR and Architekton, shared information about current projects. Attendees also heard from Gilberto Mendez and Jennifer Montreuil, CAC graduates who communicated their success stories and extended their appreciation to all those who provide financial support to help make a college education a reality for many students.

The highlight of the evening was entertainment provided by Evie Clair, a local young lady who touched many hearts across the world-making it to the top ten finalists on the hit TV show, America’s Got Talent, during season twelve. She dedicated performances to her sick father who passed away the week before the finals. The world connected with Evie and the A.G.T. judges raved over her tone, control, pitch, style, expression, the beauty of her voice, and her impressive arrangement skills on the piano. Evie got her start at the age of eight in the Tony award winning musical, Annie, at Hale Theatre. She released two original pop singles before her twelfth birthday, was invited to ‘Light the World’ for Mormon.org Christmas initiatives, and won a contest to sing the theme song for a movie which also featured her original song on the soundtrack.

“The Night of Stars was a success and we express our gratitude to all of those who attended,” stated Maggie Dooley, Director of the CAC Foundation. “It is through the support of CAC alumni, friends, employees and our local communities that we are able to assist students financially to help them meet their educational goals.”