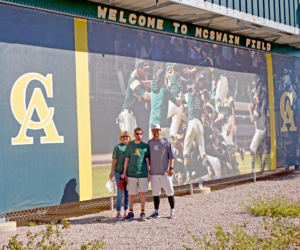 Bill grew up in Eloy and was a member of the first graduating class at CAC. He was a local business owner and fully supported CAC athletics, specifically the Baseball team.

Anthony Gilich, Head Baseball Coach stated, “The McSwain family has been a large part of the College community for many years. We are proud to be naming the CAC field after Bill and thank the entire McSwain family for their continued support.”

A significant contribution was made by the family to remember and honor Bill, who passed away this past year.

Reggie, Bill’s wife and their son, Michael were in attendance for this special recognition. Michael kicked off the game against Phoenix College by throwing the first pitch.