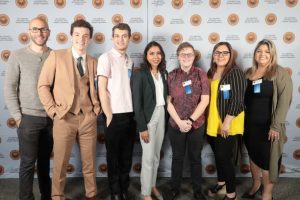 All-Arizona students demonstrate academic excellence and intellectual rigor combined with leadership and service that extends beyond the classroom to benefit society. Phi Theta Kappa, the American Association of Community Colleges, Arizona Community Colleges, the Arizona Board of Regents and the Follett Higher Education Group help these students reach their educational goals by awarding scholarships and issuing tuition waivers to any of Arizona’s three state universities: Arizona State University, Northern Arizona University or the University of Arizona.

Kouris currently serves as the CAC Student Government Association District President, is a National Society of Leadership and Success inductee, President of the Phi Theta Kappa at the San Tan Campus and is in the CAC Honors Program. He is considering transferring to the University of Arizona to complete a degree in business administration and eventually complete graduate work in the education field. He hopes to earn a Doctorate in Education and ultimately become the president of a community college.

Gray is the Phi Theta Kappa President at the Aravaipa Campus and serves as a math tutor. She will transfer to the University of Arizona and pursue a degree in computer science. She hopes to work as a computer forensics specialist for the Federal Bureau of Investigation or as a game developer.

Juarez is a National Society of Leadership and Success member and an active volunteer, assisting with the annual PTK blood drive, CAC college fair, and Ask Me Table at the beginning of each semester. She intends on transferring to the University of Arizona’s College of Psychology to earn a Master of Psychology degree. Her career goal is to study different behavioral systems around the world and conduct research pertaining to this concept.

Chapman is a competitor in the SkillsUSA Restaurant Service competition and is involved in the Student Government Association. His goal is to transfer to Northern Arizona University to earn a bachelor’s degree in hotel and restaurant management and ultimately a master’s in business administration. He hopes to open and cook in his own restaurant.

Reteguin plans to transfer to Arizona State University ultimately earning her Bachelor of Science in Criminology and Criminal Justice. Her career goal is to work in the forensic field to help solve criminal cases and bring justice.

Torrez was named the Arvaipa Campus Anatomy and Physiology Student of the Year and Biology Student of the Year last spring. She volunteers in her community with the second grade science fair and elderly community service. Torrez hopes to transfer to the University of Arizona and complete a bachelor’s degree in the Science of Nursing and ultimately plans to further her education to become a nurse practitioner.