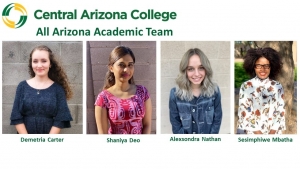 All-Arizona students demonstrate academic excellence and intellectual rigor combined with leadership and service, that extends beyond the classroom to benefit society. Students are nominated by their community college and submit their application to be considered for this prestigious award through the Phi Theta Kappa International Honorary organization. Phi Theta Kappa conducts three rounds of judging. The Arizona Board of Regents awards scholarships and tuition waivers to those selected for Arizona’s three state universities: Arizona State University, Northern Arizona University or the University of Arizona. Scholarships cover resident tuition for 10 consecutive undergraduate semesters or 60 credits (which ever the student meets first).

All-Arizona Academic Team Scholars were recognized during a virtual ceremony on March 4. CAC students include; Demetria Carter from the Aravaipa Campus, Shaniya Deo and Alexsondra Nathan from the San Tan Campus and Sesimphiwe Mbatha from the Signal Peak Campus.

Carter is a psychology major, attending classes at the Aravaipa Campus. She is a current Phi Theta Kappa and student government officer, and a member of the National Society of Leadership and Success. Demetria plans to transfer to an in-state University, most likely the University of Arizona where she will pursue a Bachelor of Psychology before continuing her education to ultimately attain a Doctorate of Psychology. Her career goal is to become a licensed psychologist specializing in the care of children or military vets transitioning into civilian life. She would like to aid in their mental healing and help to provide guidance to make a difference in the lives of others.

As a student at the San Tan Campus, Deo volunteers with Phi Theta Kappa and The National Society of Leadership and Success. She plans to transfer to Arizona State University to complete a bachelor’s degree in Biochemistry focusing on medicinal chemistry. Her ultimate goal is to earn a doctorate degree in organic chemistry. Her career goal is to work as an academic researcher.

Nathan is a student at the San Tan Campus. She serves as a current Phi Theta Kappa and student government officer, a member of the National Society of Leadership and Success, and a member of the Equity Council. She is an elementary education major and plans to transfer to Arizona State University’s Mary Lou Fulton Teachers College to earn a bachelor’s degree. Her career goal is to work as an elementary teacher, and she hopes to one day become a principal.

Mbatha is a business major attending classes at the Signal Peak Campus. She currently provides assistance to her peers as an academic tutor and resident assistant. In 2019-2020, Mbatha was the CAC Track and Field Captain. Her plans are to transfer to the University of Arizona Eller College of Management to major in finance. She is passionate about solving Africa’s salient problem, unemployment. Her career goals include creating jobs in the agricultural and green building sectors, as well as, identifying and assisting upcoming startups through venture capitalism. In addition to her academic and career goals, Sesimphiwe plans to pursue and establish her acting and writing career.