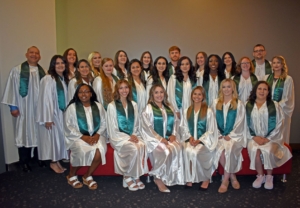 Twenty-four Central Arizona College students were recognized as graduates of the 64th Nursing Division for completing the college’s nursing program this spring.

Teresia Koinange received the Academician award in recognition of her academic excellence. The Outstanding Clinical Student award was presented to Jaysie Hall-Williams for outstanding clinical performance during the program. Karen Moroyoqui was selected as the class speaker by her peers.

The following students received their pins and will receive an associate of applied science degree.