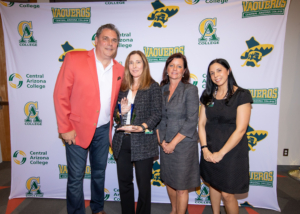 Each year CAC inducts outstanding alumni into the Wall of Success. The first honorees were inducted during the 40th Anniversary Celebration of the Signal Peak Campus on November 14, 2009. The Wall of Success is a tradition to honor alumni and recognize them for their personal and professional accomplishments.

The Vaquero Athletic Hall of Fame recognizes athletes, coaches, and/or administrators who have made outstanding contributions to the intercollegiate athletics program at CAC.

Jenna began her career with the Arizona Department of Public Safety as an officer trainee in July of 1993. She attended the Phoenix Regional Police Academy and became a trooper in May of 1995. Her first assignment was to the Highway Patrol in District Six, Casa Grande. During this assignment she served as a field training officer, general instructor, phlebotomist, reserve coordinator, and she also coordinated the first Citizen Academy in District Six.

In 2001, she promoted to sergeant and remained in the Highway Patrol in District Six, Casa Grande. Five years later she was promoted to captain and held command assignments in the Management Services Bureau, Highway Patrol Metro East District, Southern Gang Enforcement District, and the Canine District.

Jenna promoted to the rank of major in May of 2015 and served as the chief of staff for the Criminal Investigations Division, as well as the Agency Support Division. As chief of staff, she was involved with the implementation of major technological improvements in both divisions, with a strong focus on performance management, efficiency, and employee and leadership development.

During her 29-year law enforcement career she has received recognition as the District Six and Southern Highway Patrol Bureau Officer of the Year, the Criminal Investigations Division Commander of the Year, and has been the recipient of three Director’s Unit Citations.

Lieutenant Colonel Mitchell is a graduate of the Police Executive Research Forum Senior Management Institute for Police, Northwestern University School of Police Staff and Command, and the Leadership in Police Organizations Command program.

Jenna has been married to her husband, Paul, for thirty years.  They have four children, Brandon, Zachary, Ethan and Samantha.  Jenna is active in several ministries at Saint Anthony of Padua Catholic Church.

Paul Tavares began his collegiate coaching career at Central Arizona College in 2009, and before that, he served as the head coach for Casa Grande Union High School.

Being widely recognized by his fellow coaches, Paul was a two-time USA track and Field Coaches Association NJCAA Coach of the Year and three-time NJCAA Coach of the Year. Within ten years, Paul established himself as the most successful coach in NJCAA cross country by producing a national championship 50% of the time. Paul maintained the high standard of CAC cross country that his predecessors Olympian George Young and Mike Gray established.

Coach Tavares guided his teams to victory, but he never failed to celebrate the individual successes of his athletes. His athletes acclaimed many NJCAA All-American titles, all of whom call CAC home.

Coach Tavares can also be called Professor Tavares as he has been a faculty professor at CAC for 13 years. Paul now enjoys retirement from coaching as he can spend time with his family and gets a healthy seven hours of sleep. His son David, daughter Hanna and wife Lindsay proudly supported Paul and his desire to be one of the most successful coaches in CAC history.