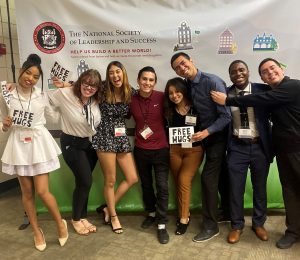 The Central Arizona College (CAC) chapter of The National Society of Leadership and Success (NSLS) has more than 270 student members this fall. The group has been engaged in various activities and will be sponsoring a national broadcast event in early November.

The students recently attended the NSLS Regional Leadership Summit in Azusa, California. The theme of the summit was “Achieve Big.” They learned the importance of not fearing failure and how having mentors will help them move through challenges to persevere. During the work sessions, students set goals that will positively impact the College and CAC’s local communities.

One CAC Student, Aerin Fulton, received a $250 Scholarship Award while attending the summit.

To begin their project work, CAC NSLS is hosting a Live streamed broadcast event featuring three-time NFL Pro Bowl running back, Tiki Barber on Wednesday, November 6, 2019 at 5 p.m. in T-116 at the Signal Peak Campus (8470 N Overfield Road, Coolidge, AZ). All viewers are invited to submit questions via Twitter and Facebook that will be answered live during the broadcast, hosted by City College of New York.

Barber’s presentation, “Be You! Tiki’s story from the End Zone to the Board Room and TV Studio” will provide insight on the importance of creating opportunities, being honest with yourself, and identifying when it’s time to evolve and reinvent yourself. Tiki is a ten-year veteran of the NFL with the New York Giants, a well-known TV personality, and Director of KultureCity, an autism acceptance and inclusion organization.

The NSLS’s Speaker Broadcast series, which reaches more than 730 college campuses each month during the academic year, is designed to support The National Society of Leadership and Success’s overall mission of Building Leaders Who Make a Better World.

About The National Society of Leadership and Success

The National Society of Leadership and Success is the nation’s largest leadership honor society. It was founded in 2001 to build a community of like-minded, success-oriented leaders who come together to help one another succeed. The NSLS offers interactive broadcasts with the nation’s best speakers, training in goal setting, and team meetings in which students set and hold each other accountable for achieving goals. These benefits, which aim to help members personally and professionally, are offered for the rest of their lives. Today, the NSLS has chapters on more than 730 college and university campuses nationwide and serves more than one million members. For more information, please visit www.nsls.org. Follow the NSLS on Twitter @theNSLS, and Like us on Facebook at www.facebook.com/theNSLS.