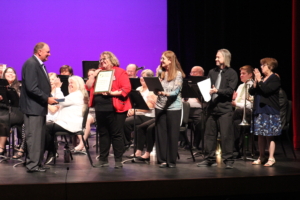 During the recent spring community band concert, Central Arizona College officially dedicated room 149 in the Don P. Pence Center for Visual & Performing Arts as the Rick Moore Music Rehearsal Room. Additionally, former Professor Rick Moore was awarded the Ron Bowen Award, an award he created to honor a past band director who continues to play in the band.

During his time at CAC, Rick was an advocate for the arts. He worked closely with local band directors, traveling to schools throughout the area to provide clinics for band students. As a result of his work with the schools he implemented the CAC high school and middle school honor band. These yearly festivals allowed young musicians to experience high quality music instruction while also forging a connection to CAC.

During his tenure he oversaw the CAC Jazz Band and the CAC Concert Band. He was also instrumental in the establishment of the Entertainment Industry Technology (EIT) Program in 2010.

In 2018, Professor Rick Moore retired from CAC as the school’s long-serving band director and music professor.

Stacey Seaman, Pence Director explained, “Rick’s legacy as a music educator is immense. Students of his have gone on to become band directors and music teachers. Many play in other groups around the state and country. Others have pursued careers in music-related careers such as theatre and arts-advocacy. Additionally, thousands of community members lives have been enriched through their participation in the CAC band and jazz band program.”

Dr. Mary Kay Gilliland, Academic Vice President added, “During his 17-year tenure, Professor Rick Moore’s service was both distinguished and significant. He was a dedicated instructor and director, a visionary and creator of the Entertainment Industry Technology Program, connected alumni and retired faculty with CAC, and engaged Pinal County residents of all ages to share and enjoy musical experiences.”