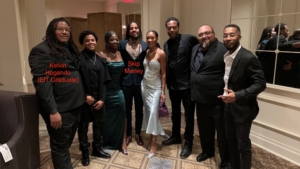 After graduating from Casa Grande Union High School, Kelvin enrolled at CAC because the college was close to home and had a music program, he found an interest in. He stated, “I selected the EIT program because at the time I was making music and after researching options I knew the program accommodated me.”

Hogando graduated from CAC, the first time in 2014, earning an associate degree in general studies and again in 2017 with an Associate of Applied Science (AAS) in Recording Engineering. During his time at CAC, Kelvin was a member of the choir and he completed an internship at Saltmine Studios which provided him with opportunities to network and get his start.

While attending classes, Kelvin experienced a time of homelessness and hardships. He worked hard to finish school and found a home at CAC that kept him motivated.

Hogando attributes his recent success to the EIT program for the skills he learned that allowed him to land this exciting career opportunity. When asked who influenced him along the way, he commented, “first and foremost God and family, my instructor Dan Bush, Z God, Myguymars, Ash Ali and many other people I was fortunate enough to meet along my journey.”

Advice Kelvin provides to others is, “Remember, God is good all the time, with hard work and dedication you will get anywhere you want in life, network it’s your net worth and stay focus.”