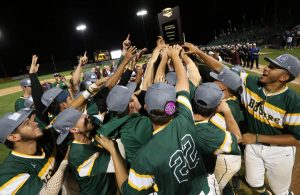 CAC’s Baseball team competed in the NJCAA Division I Baseball World Series from May 25 through June 1. They were named the 2019 National Champions on Saturday, June 1. This is the third national title for the Vaqueros. They won their first title in 1976 and their second in 2002. Following is a link to the official press release.