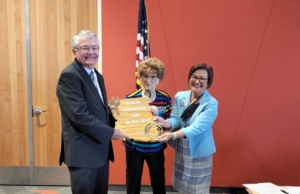 Per CAC Policy, Emeritus status can be awarded to any retiring full-time employee or member of the Board of Governors for distinguished service.

Mr. Gibson retired from the CAC Board of Governors at the conclusion of his final term in December of 2020. During his 24 years of dedicated service, he served several terms as President and Vice President. He is distinguished by being the second longest serving member of the Board of Governors.

Throughout his tenure, Mr. Gibson has been a strong and tireless advocate for Central Arizona College and for community colleges across Arizona. He was instrumental in the passage of a local bond which funded the building of three new campuses and the renovation of two older campuses. He served multiple years as the College’s representative to the Pinal County Governmental Alliance and has been an active member and leader of numerous civic, service, and business organizations.

Dr. Jackie Elliott, CAC President stated, “Mr. Gibson has been and is highly valued and deeply respected by all those who have had the honor to know him and serve with him.”