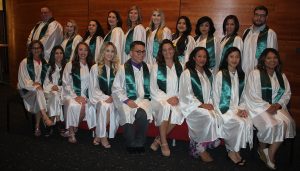 Nineteen Central Arizona College students were recognized for completing the college’s nursing program during the 56th Nursing Division Pinning Ceremony held at the Signal Peak Campus on May 10. Of these 19, seven of the students were among the first to complete the NAU Concurrent Enrollment Program.

Professor Dion explained the importance of showing care to others and how important this is for being a nurse. She recited Mother Teresa’s Poem, Do it Anyway.

Once the graduates received their pins, class speaker Edward Aguirre provided encouragement to his fellow graduates, “You’re going to feel like quitting. You’re going to struggle…but…You’ll rise, because your strength as a nurse is not determined by one grade, one failure, one repeated semester, one shift or one job – it’s an ongoing journey of learning, honor, humility and a chance to make even the smallest difference in the lives of your patients.”

Jenny Yheulon  was recognized with the Excellence in Clinical award and Cheryl Pedro earned the program’s Academician Award.

*Indicates students who completed the NAU/CEP