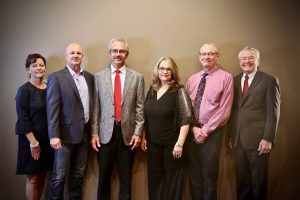 To begin the evening, a reception was held in the Don P. Pence Center for Visual and Performing Arts, home of the Wall of Success that honors outstanding CAC alumni. The celebratory event then moved to the Mel A. Everingham Student Union.

Rick Gibson (‘70), PCCCD Governing Board President and 2009 Wall of Success inductee served as Master of Ceremonies.

Dr. Jackie Elliott, CAC President, welcomed alumni back to CAC with her speech, “The Pride of Pinal” and gave special recognition to all Wall of Success and Hall of Fame members as well as Olympian George Young.

The featured speaker for the evening was Dr. Bob England (‘76), Interim Director for Pima County Health Department and 2010 Wall of Success award recipient. He spoke about the impact CAC had on his life. Dr. England has served as a public health doctor his entire career. He was the Arizona State Epidemiologist, ran three local health departments and retired last year after 12 years as the Director for Maricopa County.

Each year Central Arizona College inducts outstanding alumni into the Wall of Success. The first honorees were inducted during the 40th Anniversary Celebration of the Signal Peak Campus on November 14, 2009. The Wall of Success is a tradition to honor alumni and recognize their outstanding achievements.

Lucinda F. Boyd, (’98) was awarded the 2019 Outstanding Alumna award, sponsored by Global External Relations. Lucinda grew up in Benson, AZ. She is the oldest of eight children. While in high school she was active in church, sports and clubs, but with no encouragement to go to college, she decided to move to Maricopa in 1984 to raise a family.

Boyd worked with youth in Maricopa for many years teaching religious education classes and serving as a Religious Education Coordinator from 1986 to 1996 at the St. Francis De Sales Catholic Mission, now our Lady of Grace. She was instrumental in starting the yearly Annual Festival and Carnival. Then one afternoon, there was an offhand comment from a friend, “Why don’t you go to college and become a nurse.”

At the age of 30 Boyd began a CNA program. Upon her graduation, she enrolled at CAC, taking classes while working and raising her children. She was elected the Vice President of the local Student Nurses Association and elected as the Secretary of the Arizona Board of Directors for the Student Nurses Association. In 1998, Lucinda graduated as a Registered Nurse. She received the Outstanding Student Nurse of the Year Award and the Army Nurse Corps Spirit of Nursing Award.

Boyd started a career at Casa Grande Regional Medical Center beginning on the Med/Surgical floor and advanced quickly to the Telemetry/Cardiac unit where she became a charge nurse. She later joined Rural Metro/Southwest Ambulance as a Critical Care Nurse. Today, Boyd works as RN Case Manager in Home Health and Hospice.

Along with her husband Rob, they founded the 501(c)3 organization ‘The Streets Don’t Love You Back,’ with the mission of educating youth against gangs, drugs, violence and abuse. She is the author of the Lifeskills Intervention Program, a curriculum on the skills and tools needed to overcome and be successful in life. The program is taught in the Maricopa and Pinal County Detention Centers, ADOC and in over 155 prisons throughout the country.

Among her many honors, Boyd received a Humanitarian Award in 2015, the Maricopa Community Advocate Award in 2016, Maricopa Chamber of Commerce 2017 Nonprofit of the Year Award and HOPE Award in 2017.

Boyd serves as President of the Zonta Club of Maricopa and is a Panel Member of Pinal County Juvenile Restorative Justice Advisory. She sits on the Maricopa Parks and Recreation Board, Library Advisory Board, and is a board member of the Central Arizona College Foundation.

In addition to the alumni award, the College recognizes athletes, coaches, and or administrators who have made outstanding contributions to the intercollegiate athletics program at CAC. Chuck Schnoor, Athletic Director, presented the Vaquero Athletic Hall of Fame Award sponsored by McHaney Family Dentistry to Mike Gray, retired CAC Track & Cross Country Coach.

Gray, who grew up in Wyandotte, MI was an outstanding athlete at Roosevelt High School, Class of 1968. He enrolled at Eastern Michigan University where he graduated in 1973 with a Bachelor’s of Science in Physical Education. He earned his Masters of Arts in 1980 from Arizona State University.

Gray’s coaching successes began at Mountain View and Westwood High Schools and has 20 years of consecutive undefeated coaching in dual, divisional, and regional championship meets at the college and high school levels. A three time Arizona High School Coach of the year, his career dual meet record in Cross County/Track & Field was 167-31 with two State championships. He transitioned to a higher education career as an assistant coach at both the University of Arizona and Arizona State University before joining the athletic department at Central Arizona College.

A National Track and Field Hall of Fame member, Former Olympian and CAC Athletic Director George Young encouraged Gray to come to CAC. In 1996, he joined CAC as Professor of Sports & Fitness and became the Track and Cross Country Coach. During his 14 year CAC career, Mike coached 14 National Championship teams in Track & Field and Cross Country. He coached 40 individual National champions. In addition, he was named the NJCAA National Coach of the Year award 6 times.

As a coach and faculty member, Gray was able to provide support, guidance and encouragement which enabled student-athletes to thrive and grow academically as well as athletes. Ninety percent of his student-athletes were awarded four-year college scholarships.